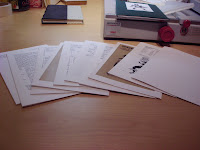 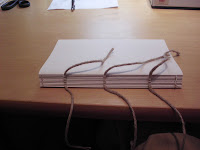 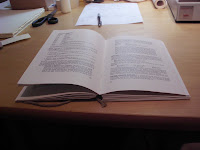 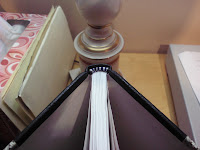 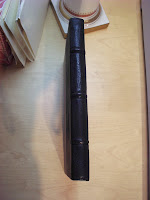 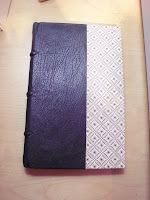 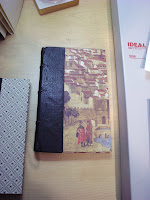 And yet gamers had to play Palladium Fantasy to get
the skill Book Binding, Leather.

Another neat player made modification of rule books from Oban of New York Red Box:

First I have combined the PDF files of the books I want to bind, then print them out as signatures - in this case ten signatures of five folios each. The signatures are then sewn together on cords to form the book block. Hand sewn headbands are added to the head and tail. I cut front and back covers, and the cords are woven into the covers, binding the whole thing together. The resulting book is then quarter-bound in leather - I have been using Hewit goatskin for these books. The remainder of the cover is covered in decorative paper. Recently I have started tooling the leather.

Sometimes I find PlaGMaDA documents which include private information, phone numbers especially. It's always tough as to whether or not I should include these documents in the online file.

On one hand, the information is often vague, a first name and phone number without an area code on a twenty year old document is probably not going to lead to an invasion of privacy. On the other hand, I am not going to take a chance - such documents are always removed. If something absolutely spectacular included a piece of private information, I would simply blur or bar out the offending section.

For the record what I tend to find are phone numbers and email addresses. I myself have jotted down emails on character sheets or note pages while at cons, it's fast and convenient.

If anyone does find information like this on a document hosted on the site, please let me know by posting here - I'll fix it immediately.
Posted by tim h at 3:58 PM No comments:

Looking at the Collection: Attack Bear


A recent character sheet acquisition from Black and Reade near Denver had something that I found interesting. Here's the first page, which isn't terribly important, and here's the second page below:

A hum drum list of magical items, complete with misspellings. Not that exciting, but then under "livestock" we see an attack bear listed. An attack bear is a pretty fantastic thing to write down on the character sheet as two simple words. If it was my attack bear I'd have written it in giant letters surrounded in lightning bolts, and probably bothered to give it a name. Heck, I'd give an attack bear its own character sheet because it deserves it.

Torn the Elf needs to put a little effort, a little pride into his pet.

This piece is part of a series of homemade character sheets all neatly filled out by the same hand and seemingly never used, it's a reasonable guess that some hopeful DM made a bunch of characters for a scenario that never developed or friends that never came to play. I see a lot of this in the collection and it would probably help to make up a name for the phenomenon, maybe "Empty PCs" because it sort of sounds like "NPCs" when spoken aloud.

You saw a lot of ready-to-go characters with Judges Guild stuff, and with people who were influenced by Judge's Guild. Here's a list of novelty filled 1st level fighters from David McLouth: 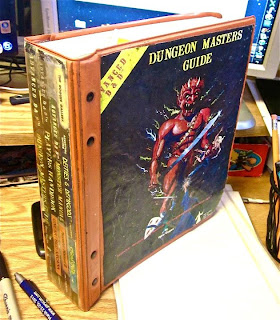 These are the first edition books used by Jolly Blackburn back in the day, here's what he has to say about them...

"Was organizing my bookshelf and came across this monstrosity -- my original AD&D GMG. I bound ALL the AD&D books as one huge book along with my own house rules/notes. I was such a geek. (Okay I still am)."

The neat thing is that I've seen this before, it's not an uncommon impulse.

"Its actually a great way to bind the books -- it was a Maytag Washing Machine parts manual originally -- three hole punch with four inch spleens. You can open to any page and it lays open by itself. I ended up binding three or four friends' books the same way back in the day."

Smart, simple, a super nice touch that he put the spines inside the spine piece of the binder.

"It has allthe following books in it: DMG, PHB, Unearth Arcana, Deities and Demigods, Monster manual and the Fiend Folio [and the Monster Manual II - ed.]. Once you removed the hard covers you could reall pack them in . ;) Oh I think the Rogues Gallery is in there too."

I love how nicely they all fit.

"I'll confess -- my original inspiration was to thwart players who were always asking to borrow my books."

This item is not from the archive, the photo was provided by Mr. Blackburn for this posting. There are items like this in the archive, but none so grand. It's fantastically interesting when an item is intensely worked and personalized, customized for a specific task.
Posted by tim h at 9:28 AM No comments:

NY Times mention of a sort 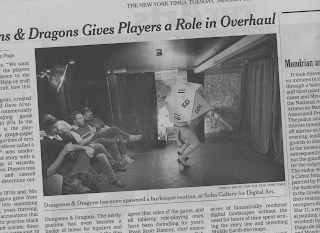 Just to let you guys know I am always in the field, doing research and working hard, I'm one of the guys in the front row. The D20 Burlesque group is a great show.

This photo appeared in the printed paper, attached to "Players Roll the Dice for Dungeons & Dragons Remake" by Ethan Gilsdorf. The photo is from an art and gaming event called "Dungeons and Dragons, On & Every Onwards" which I curated at the Soho Gallery for Digital Art. The event organizer was the remarkable Tavis Allison.
Posted by tim h at 9:10 AM No comments:

Two new folders are up in the PlaGMaDA archive: a donation by RB and material collected from the games played during the Dungeons and Dragons On & Ever Onwards exhibit at the Soho Gallery for Digital Art in Jan 2012.

This map was drawn by Paul H. while playing with Mike Mornard,
an original member of the Gygax game group.
Posted by tim h at 7:14 PM 2 comments: