"The Shadow Out of Providence" Kickstarter

So I am excited to be participating in a project called "The Shadow Out of Providence", a book being Kickstartered by Ezra Claverie.  Ezra is not just a long time chum of mine, he's also a significant PlaGMaDA contributor and a great help to the project.  The book is about the way Lovecraft writes, I think, but it isn't striving to be Lovecraft.  From Ezra:


...it is “Lovecraftical” (to coin a term). It treats Lovecraft the writer, the thinker, and the cultural phenomenon, rather than the sliver of his work on which most writers fixate (one that he sometimes dismissed as “Yog-Sothothery”)...

Three separate fictional universes challenge the reader: if the oldest and strongest source of fear is the unknown, what, in each setting, counts as unknown?

The book has stories which wander in and out of reality, confusing what's true and what's not.  The story in which I am featured is a fake interview between myself and Ezra, in which I talk about an underwater art installation I am making about the reservoir which flooded the town of Dunwich.  Reality has been tweaked to fit the HPL in a way that I found unsettling when I first read the article.


This is not a conventional parody, but a metafictional re-working of Lovecraftical material, especially Lovecraft’s intellectual concerns—such as the power of print and visual media, the unknown as a source of fear, and ignorance (willful and otherwise) as a defense against the new.

There also might be some Cthulhu-horror gaming material involved, if the project takes off...

Oh.  And I almost forgot to mention that the book has a bunch of original artwork by Erol Otus. 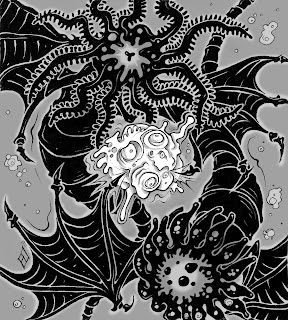 A poor, beleaguered shoggoth by Erol Otus
Posted by tim h at 5:39 AM No comments:

Chris does a good job of detailing the why's of the pieces he's put up, which is important.  It's these sorts of detailed explanations that make documents come alive.