Wired article, free party this Sunday, all is good in the world 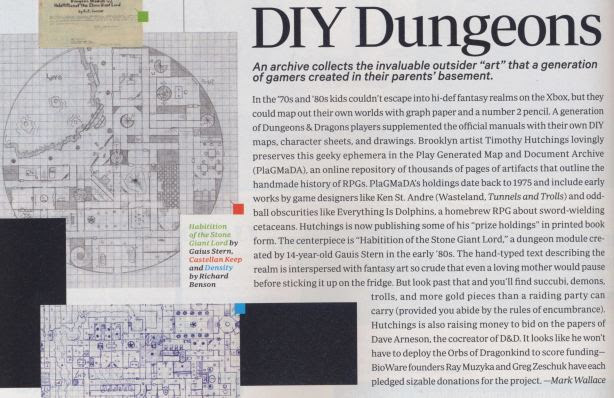 Big news for us:  A spot on the project in Wired magazine, written by Mark Wallace.  Keep an eye out for the web version!

Big news for you:  A book release party in Brooklyn to celebrate the release of Everything is Dolphins by Ray Weiss.  This Sunday at Shea Stadium BK at 20 Meadow Street, games start at 5pm and music starts at 8.  Free admission, all ages, bring some dough because you know you're just going to have to buy a t-shirt or two.

Kickstarter:  We are overjoyed to announce that the Habitition of the Stone Giant Lord & Other Adventures from Our Collective Youth has quadrupled its admittedly modest funding goal.  Help us get to our next goal, which will let us do a traditional print run with more pages and a fancy cover.

And don't miss a post about all this over at The Mule Abides, it's sure to horrify and charm.

Kickstarting the Habitition of the Stone Giant Lord

So a Kickstarter is running until October 10th for The Habitition of the Stone Giant Lord & Other Adventures from Our Collective Youth.  Go here 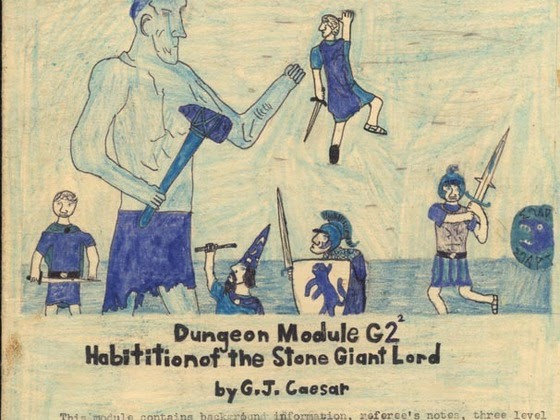 In 1981, 13-year-old Gaius Stern wrote and illustrated The Habitition of the Stone Giant Lord in imitation of TSR’s Dungeons and Dragons adventure modules. The Habitition is a true labor of love, typed and drawn as a DIY addition to the “Against the Giants” series of modules, part time capsule and part outsider art.

As art, its text and image show how a creative teen made his own contribution to the genre of roleplaying adventures, but where most such books were the work of a writer, a crew of play-testers, editors, and a stable of artists, Stern went it alone. As a time capsule, it provides a window on a particular way Dungeons & Dragons was played at a particular time.
PlaGMaDA and The Hutchingsonian Presents are putting together a collection of adventures written by young people in the 1980s. The focus is on game modules written by players, including their carefully made maps and painstaking illustrations, framing the sort of adventures we played back when we were kids. Help us print this full color book, it'll be great!
If we meet our goal we will be producing a full color, soft cover book at a POD facility in the United States.  If we meet our bonus goal we will do a traditional print run.  Thanks for your help!

http://www.kickstarter.com/projects/timh/the-habitition-of-the-stone-giant-lord-and-other-a
Posted by tim h at 7:41 AM No comments:

On the Reading of Old Modules, by Nicholas Mizer

When I was an undergraduate, one of my teachers told me that the most important thing about Plato isn't the ideas that he put forward or the claims he made, but that every dialog he wrote is an invitation for readers to have their own dialog about Big Ideas. In other words, The Republic is a "just-add-people" instant seed kit for interesting conversations. You might agree with him, you might disagree, you might crack a beer bottle over your friend's head for holding ignorant concepts about the nature of justice (an unlikely but possible outcome), but if Plato got you talking, then mission accomplished.

I'm not a classicist, so I don't know if that's a widely held idea by Plato scholars, but lately I've been thinking about how the same could be said of D&D modules.  True, they lay out a map, tell you who the bad guys are, and usually at least hint at a plot, but they're not stories in and of themselves. Like a Plato dialog, a module is the seed of something interesting.  Given the flexibility of a role-playing game, there are a near-infinite number of stories that could grow out of a single module.  For those who, like me, enjoy reading modules, I think that part of the appeal is in imagining some of those possibilities. Some scholars argue that humans are inherently narritivizing creatures; that is, give us a set of events and we will try to make a story out of them. Modules, and role-playing games more generally, give us ample opportunity to exercise those pattern recognition (creation?) abilities. 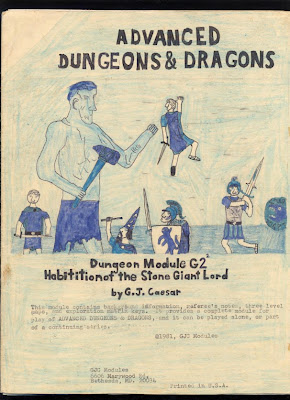 That may be so, why should we care about the story seeding kit provided to the world by G.J. Caesar, age fourteen, in 1981. Habitition of the Stone Giant Lord is not The Republic, and when I told my economist friend I was studying it he pointed out that if presented with a thirty-one year old economics paper written by a middle schooler he would be more likely to laugh than to consider archiving it. So why is it different with old gaming documents? For many gamers the awesomeness of Habitition needs no explaining. D&D is, as my friend Tavis Allison often reminds me, a game that is largely about nostalgia-for-things-we-never-knew.  Nostalgia for older versions of that nostalgia just seems to fit.

As much as I enjoy nostalgia, though, I think there are a lot of other good reasons to think carefully about something like Habitition. As I said, telling stories seems to be one of our primary activities as humans, but our understanding of what "stories" means varies across time and space, as does our understanding of how best to tell them.  This is true when considering differences between very different cultures, but it is also true over the almost forty year history of D&D.  By looking at how modules have changed over time we can gain insights into our changing assumptions about what story is and how best to produce it, and how the structure of the seed guides the stories that can grow from it. From there (to put it grandiloquently) we can learn more about what it means to be humans living in a world full of events ripe for narrativising.

Changing ideas about story are only one set of interesting conversations that we can have about these materials, however. Like both Plato dialogs and Habitition, PlaGMaDA is a seed that allows for any number of interesting conversations.  What do gaming maps tell us about how we navigate our worlds, for example? Or what do the characters we create (and the records we leave of them in dogeared character sheets) tell us about our identities?  For the person willing to engage them, the documents in the archive represent an endless resource for exploring these topics. 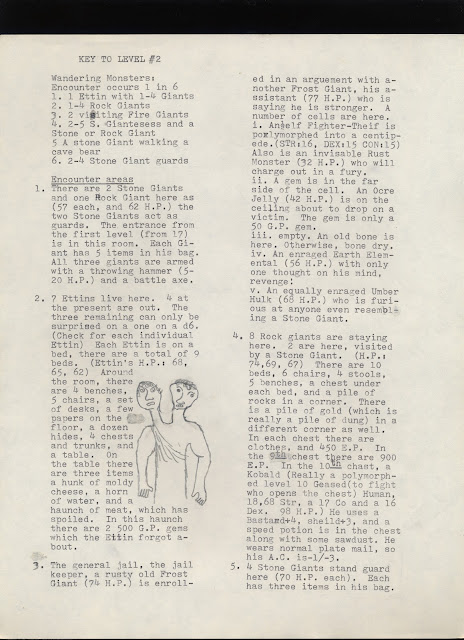